The Honduran staff was a joy to work with…Dr. Maggie Jolly

I slipped on a scrub top and walked down the hill to the hospital. It was one of my call days, and the nurses had given the characteristic message on the Ham radio, “Dra. Maggi, Dra. Maggi, tenemos una emergeeencia.” They always seemed to draw that last word out, making it sound more urgent than it really was. This case was simple however, a kid with a rash, and I didn’t expect it to take long. I had turned to Mackenzie as I left, just after breakfast, “You don’t think I need to change out of my shorts and flip flops do you?” “Nah,” she replied, “you won’t be gone long.” 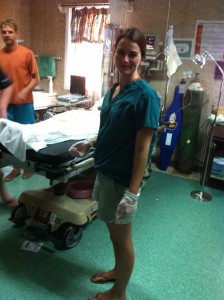 How long did your child have this? Does it itch? I had made it about two questions into the interview of the child’s mother when I heard a bustle in the other ER bed. Glancing past the curtain, I saw them hoisting a young man with a rather large blood stain spreading down the front of his shirt. “What happened?” Calmly, “Una balla Doctora.” As I could hear the gurgling from his chest from across the room, I turned to the mother and asked her to excuse me for a minute.  After two painstakingly small and difficult to place IVs, several liters of fluid, a measly shot of IM toradol, and a large bore chest tube placement, the patient was finally stabilized.

Quite a rush of adrenaline, when your trauma bay team initially consists of only two generally trained Honduran nurses, other physicians have to be called in by Ham radio, and the Xray tech has to be called in from afar on his bike (we left a voicemail message on his phone and never actually saw him that day). No tension pneumothorax, no other complications, thankfully, and he did extremely well.  The trauma surgeon who came in to help me place the chest tube, a veteran of several tours in duty in Afghanistan, looked at me after all was said and done, stating, “Well will you look at that. You didn’t even get blood on your shorts!”  I think that will be my first and last chest tube insertion while in flip flops, for the record.

While one of the most intense, the past three weeks have been spent full of similar intriguing learning experiences.  I was lucky enough to be able to spend them working at Hospital Loma de Luz, a small but comprehensive missionary hospital approximately two hours south of La Cieba, a large city on the North Coast of Honduras.  Typical days were spent in clinic, after rounding on any patients, mothers or babies you had admitted in the days prior. Clinic encounters ran the entire gamut of possibilities, from the familiar triad of HTN, Diabetes, and hyperlipidemia to more unfamiliar complaints such as “diarrhea/stroke” (that was a disconcerting chief complaint to read, and quite complicated to deal with in clinic). I noted that most patients were in the practice of not taking their medications the day of their appointment, as they knew we were to be evaluating their blood pressure and they did not want the medications to interfere with the value…  I saw mothers and babies whom I delivered (recen naciedos), well child checks (one “chequeo general” turned out to be a 12 yr old with an obvious genetic syndrome and bilateral cataracts who had never been seen before), as well as numerous bouts of Giardiasis and parasitosis. I also saw a girl with Bells palsy, lots of optho complaints (and the removal of the largest cataract I have ever seen), orthopedic complaints, kidney stones, gallstones, and an abundance of ladies presenting for prenatal care. 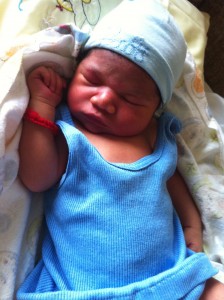 Call days were always interesting, and as is characteristic for the visiting doctors I’m told, were usually busy.  Often paired with Mackenzie, I was able to do a multitude of vaginal deliveries as well as help out with a C-section and do the baby resuscitation. The vaginal deliveries often tended to be at 4AM, after walking back and forth to check on the patient and make sure the nurse’s vaginal check was accurate (they almost always were). Monitoring was brief, but the nurses would turn it on for ten minutes prior to my arrival, as they knew I was used to at least glancing at a part of a baby’s strip. Otherwise, it was all by sound, if the mother was on the monitor at all.  As I had witnessed in Guatemala previously, the mothers delivered their babies without so much as Tylenol, and all were very gracious. It always made me smile: in the warmth and humidity of the tropics, the families often dressed their new infants in tank tops rather than onesies.

I learned to cast broken bones on call days, and also sewed up lacerations from machetes.  I learned that treatment of stroke is difficult without the aid of an immediate CT scan. Treatment of MI is difficult without PCI or heparin or lovenox.  Treatment of cancer is often impossible, and sometimes people can get septic and die from infections that have been present much longer and progressed much more quickly than they might have in the states. Pressors don’t work as well if you can’t stop the bleeding and you don’t have ready access to blood transfusions.  (Thankfully these were not all lessons learned on my own personal patients).

In general, my Spanish had improved greatly after my 9 months in Guatemala during medical school. Rather than being stuck on basic communication, the Honduran nurses spent their time improving my pronunciation and correcting inaccuracies: “Como lo veo?” I asked the ladies working in the lab. “You look very pretty today Doctora. Giggle giggle.” I had accidently asked them how I looked rather than asking how the labs looked.  They appreciated the extra laughs.

The Honduran staff was a joy to work with, as was the medical missionary staff.  I spent time with an ER doctor from the states, who to this day is so dedicated to teaching that whenever he staffed patients with me he inevitably made it home hours later than he normally would, solely from the extra time spent with me on the ultrasound machine or looking up new concepts. I was able to witness Mackenzie Slater use her full spectrum skills from VCMC as she delivered babies vaginally, did C-sections, worked in clinic and took care of ER patients. I was able to see how much she had gained even, adeptly carrying out obstetrical ultrasounds for dating and reducing and casting fractures in the ER. It was encouraging to see how much she uses her skills, how much her skill set has grown, and how happy she is post residency doing work that she loves. 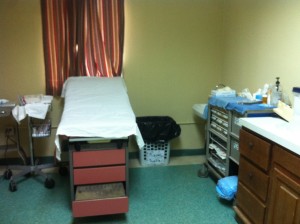 I go back to back to medicine in a couple of days, then surgery service again in a month. I’m glad to continue learning, but am betting that the next time I do a chest tube, I won’t be in shorts and flip flops…